The *Zondo family was overwhelmed by their life situation. The mother was chronically ill and mentally challenged, the children were poorly fed and missed school frequently, and the family was dependent on child support grants for survival. The grants were not large enough for them to survive on, which led them to be in a cycle of debt with loan sharks. The CYCW intervened with this family on the 5th September 2014 as a result of a door-to-door family recruitment. This household was referred to the CYCW by the area Community Care Giver (CCG). The family consists of 4 children namely; Vamsile (20 years), Asabonga (17 years), Londiwe (10 years), and the last born Siphiwe Biyase (6 years).

The CYCW intervened to help the family improve their financial management; she networked with schools for the support the children needed; she connected with the social grant department to obtain food parcels and an additional grant; and she linked up with the Department of Agriculture to obtain seeds for a food garden. This resulted in the family being supported to manage their home and resources to better provide for the children, and the children were able to work towards completing school.

Siphiwe was not the son of the mother’s husband, as a result the parents were separated after the father discovered this information. The children were staying with the mother and the child support grant for two of the children was the only family income. The mother was mentally challenged, which was discovered by the CYCW during interaction with the family. Vamsile had failed her matric and was at home, Asabonga was in matric, but not attending school regularly and Londiwe and Siphiwe were not attending school. The children were going to school without food as the mother was paying her loans with the grants she received for the two 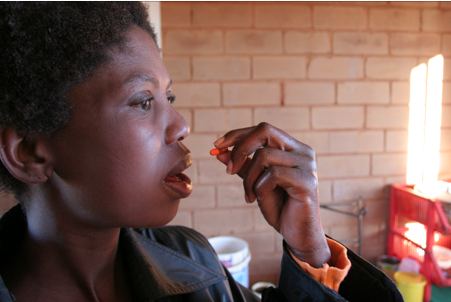 children. The mother was not adhering to her ARV treatment, the shortage of food in the house being one of the reasons. The house was untidy and the mother was struggling to supervise her children because of her mental health status.

The CYCW started by visiting the family twice a day to build relationships, especially with the mother. Fortunately, the mother was very open and shared all important and personal information with the CYCW. The CYCW referred the family to the Department of Social Development and SASSA for a grant application for Asabonga and for food parcels. However, the social worker was not cooperative, and only after a lot of hard work from the CYCW was the grant application processed. The family then received food parcels for three months while waiting for the grant application to be approved. The CYCW taught the mother about budgeting and assisted her to pay all of her debts while receiving the food parcels. The CYCW also visited the Department of Agriculture to advocate for seeds for a food garden and land was identified for food gardening.
The CYCW held a family meeting with Asabonga and her mother to discuss the issue of school attendance. All of Asabonga’s challenges and reasons for not attending school were discussed namely, the issue of hunger in the house, her school uniform being bad condition and the issue of lack of toiletries. The CYCW went to Asabonga’s school to advocate for her and to get a new uniform. The CYCW continued her advocacy for the family by going to the nearest primary school for admission for Siphiwe and Londiwe.

The school provided a new uniform to Asabonga and a good relationship between the school and the CYCW was established, which enhanced the communication. Regular school visits were conducted by the CYCW for support and monitoring of the children’s progress. The CYCW linked Asabonga to a study group that she attends every Monday and Thursday after school. Support is b 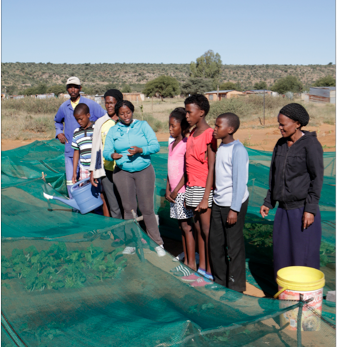 eing provided by all stakeholders in terms of monitoring the progress of the children and family. Siphiwe and Londiwe were admitted to school and the mother was able to buy school uniform for each of them with the Child Support Grant money. Both children did very well at school and managed to progress to the next grade.

A daily routine was designed by the CYCW, together with the family, since they were struggling to assign chores in the household. The children are following a daily routine on their own, without supervision, and the sense of independence has developed.

Asabonga has passed her first term and has sent through a CAO form using her Child Support Grant money.  Vamsile has been motivated by seeing her siblings attend school and has enrolled herself to write her supplementary examinations.
The family is now eating from the food garden which assists them to adhere to the budgeting plan that was designed. The family is able to save money and they are now debt free. The CYCW is still conducting home visits to the family as to monitor progress. Vamsile has been of great support to her siblings as she was motivated by the CYCW to help them.
The changes in this family show that they have achieved greater security through managing their resources and caring for each other in a process introduced and supported by the CYCW.  The younger children are attending school, the older children are completing school and looking forward to post-school studies, while the mother is maintaining her treatment schedule and her health is stable.  All the children help with the food garden which helps to feed them.  The CYCW has supported the family in accessing additional support from external sources and to use these resources to support the family in caring for each other.