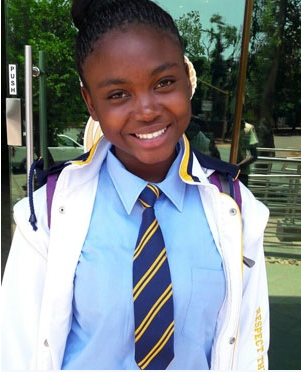 Khanyisile Mlangeni, 17, has earned three distinctions and wants to study a Bachelor of Science at the University of Witwatersrand.

She was forced to walk the distance every day, often getting to school exhausted, but she soldiered on.

"His passing was difficult for me because I received money for transport to go to school from him, so since he passed on there was no-one who gave me that money that he used to give me. I had to walk to get to school.

"It was painful because I would get to school feeling tired... but I survived because of the programmes that helped me and motivated me to keep on working hard," she said.

Mlangeni, who has also lost her mother, now lives with her grandmother. She and her younger sister depend on their grandmother's social grant to cope.

She credits the department of social development's after-school programme, Isibindi, with her matric results success.

"The programme helped me and motivated me to keep on working hard," she said.

Isibindi helps Grade 12 learners who come from youth or child-headed households by assigning child and youth care workers to help them with their school work at more than 300 sites across the country.

On Tuesday morning, Social Development Minister Bathabile Dlamini congratulated Mlangeni and 11 other learners from Gauteng on achieving outstanding results and announced that the learners would be receiving funding from the National Student Financial Aid Scheme to pursue their tertiary studies.

Dlamini said 83% of those who wrote the exams had qualified for tertiary studies.

"Despite the conditions of our vulnerable children, 41% managed to receive a bachelor's pass."

She said the majority of learners who had obtained bachelor's passes were from Gauteng and KwaZulu-Natal.

Mlangeni was among them.

The 17-year-old obtained distinctions in mathematics, physical science and life orientation. She said she was slightly disappointed as she had expected to also get a distinction for life sciences.

Losing her father had dealt her family a huge blow and she wanted to prove to herself that she would overcome her grief by doing well at school, she said.

"I walked alone and I used to think a lot. And I would see cars passing by, seeing women driving them and I would be like: 'One day that will be me'. That's what motivated me.

"It isn't a good thing to say, but I feel like God knew what he was doing when he took my father because that motivated me and reminded me of how poor I was."

She also hopes that her sister will be motivated by her performance and take a leaf from her book.

"It will inspire my little sister to do better than me, because [when I got the results] she was like: 'You got three, well I'm going to get seven,' and that's what I wanted in the first place."

She said her grandmother was surprised by her results.

"I used to fail maths so my grandmother wasn't expecting this. She is super happy," she said.